Doug Steinburg, from Victoria, recently worked as hospitalero with his wife Carol and he has provided the following report. If you are interested in becoming a hosptialera/o, a training session will be offered in London Ontario, October 25-27, 2013. Please contact Tom Friesen and he will provide more details. In the meantime, read on:


REPORT FROM LA COQUILLE, France – by Doug Steinburg
For a first posting as an hospitalero, why not a place named La Coquille? That was my response when offered this posting by the Association des Amis et Pèlerins de Saint Jacques en Limousin-Périgord.  La Coquille is a village of some 1200 souls on the Route de Vézelay, midway between Limoges and Périgueux.  Although easily accessible by train, my wife Carol and I brought a car to enable us to visit nearby sites during our off-hours.  All necessary services (grocery, bakery, wine shop, market, etc.) were available in La Coquille, so arriving there and carrying out the work could be done using only public transport.
The refuge itself was the result of the bequest to the municipality of a small hall which the owner had used to stage amateur theatricals.  His only condition to the gift was that a refuge be established in part of it.  Opened two years ago, the refuge contains a room with six beds, a separate room with a bunkbed for the hospitaleros, wc, bathroom with two showers – which, as only one person at a time ever used it, we saved on work by marking one “hors service” – and a large room with table for eight and reasonably well-equipped kitchen, albeit without much work space.  The one lack was a suitable laundry space.
Aside from the usual duties of welcoming, registering, keeping accounts, cleaning, and waving “bonne route”, hospitaleros at La Coquille and its sister refuge at Sorges (some 40 km down the road) are expected to prepare the evening meal.  Fortunately, this is France, and even better, La Coquille is in the Périgord, which they claim is the foie-gras and truffle capital of not just France, but the WORLD!  Although one never knows from day to day how many pilgrims there will be, or how many of those will choose to cook for themselves instead, we managed to remain within the budget constraints of the amount collected for meals.  Pasta and meat sauce was NOT on our menu as we had chosen to make this stop a real culinary break for our pilgrims.  Needless to say, part of one day’s main course sometimes appeared the next day as a starter!  By the end of our fifteen days, we had become fairly adept meal planners.
La Coquille was not a difficult refuge to keep clean given its size, so we were able to explore the locale, an area steeped in the mystery and romance of the 100 Years War and the personages of Richard Coeur de Lion, Edward the Black Prince, and Eleanor of Aquitaine.  In fact, the town just 15 kilometers to our north held the ruins of the castle where Richard was killed and where (reputedly) his heart – or some other hidden part or his anatomy – is buried.  The many chateaux, abbeys and caves filled our off hours, even despite more rain and cold than the area had received in as long as anyone could remember.
In addition to all of the wonderful pilgrims we met, our stay in La Coquille was made more pleasurable by the friendship we made with Anne-Marie, the person caring for our sister refuge in Sorges.  Each morning after our pilgrims departed, we were able to call or receive her call to discuss the numbers to be expected and any idiosyncrasies which might help her make the arriving pilgrims’ stay more special.  In addition, Anne-Marie would tell us all the good things the pilgrims had to say about their stay with us – if there were some not-so-good things, she never told!  It transpired that Carol’s apple crumble was quite the hit.
Overall, our experience as hospitaleros was great and we may well do this again. But one last note: the Camino is a long road, but a very small world.  Right after our time was completed at La Coquille, I set off for Saint Jean Pied de Port and yet another go.  Between there and Burgos, where I stopped for this year, I encountered FOUR of our pilgrim guests! One was on a lonely stretch of country road, two in the Cathedral of Burgos, and one at the wine fountain in Monasterio de Irache.  The Way is full of surprises. 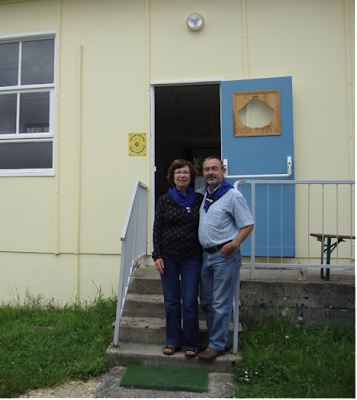