And this was not just a rumour. Apparently on the 2/3 September weekend, 700 pilgrims set out from Saint Jean Pied de Port, overcrowding Roncevalles to the point of no food or beds, and now these pilgrims are spread along the camino.

This in from Dody in Nájera: This Albergue is full, all 90 beds, including a dog accompanying a girl with a disability. Apparently all in Najera are booked. So I guess the Camino is busy although I didn't have any problems on my way from St.Jean last week.

And from Linda in Estella: Hola amigos!
This is Linda in Estella. We have been very busy here with a few nice breaks to nap!
I am celebrating  Estella which I missed on my own Camino - a beautiful historic city. And I am loving all the pilgrims coming to stay with us.

And an update from Jeannie and Calvin in Villalcázar de Sirga:

Well Moises and Oscar both came round last night and it was good that they did empty the donation boxes because there was an avalanche of money!! They hadn't emptied it since July so there were probably several thousand euros there!! Both of us feel much better now that they have emptied the boxes. They didn't have the key for the box that you put euros in for hot water so I think they are coming back today.

Today we went for a walk to the hermitage a few kilometers away and Oscar's father and Moises uncle were there! We wouldn't have known that except I asked to take a picture of the two men there and then when I said we were hospitaleros they put things together and said that Oscar and Moises had told them they had been talking with us yesterday. It's lovely to start fitting family connections together.

Thanks so much for your help!

We leave Oct 1 st and they don't have anyone coming for the last two weeks. I told Moises and Oscar that I would ask you two if there was anyone who would want to come for the next two weeks.

The sunsets are fabulous, but when I showed the photos below to Oscar he shrugged and said every day in Sept is like this!

From Jeannie and Calvin at an albergue for 20

Hello from Villalcázar de Sirga
Yesterday  was supposed to be the day that the "butano" truck comes and replaces the butane tanks. We use butane to heat water for showers and to operate the stove- both of which are extremely important things when people have walked 20-40 kms a day!

So Calvin put two empty tanks on the side of the curb, as we noted that other people were doing. Two men working at repairing and beautifying the area around our building (which is at the back of the municipal hall) made sure we did what we were supposed to do. We stayed close to home for most of the morning except when we went to the Dovecote restaurant (3 blocks away) for lunch.  When we returned the butane truck still hadn't arrived. Later in the afternoon a contingency of men (two of the same ones that were very involved with Calvin and his repair job on the bicycle with the hole in the inner tube) came to check on the situation. One of the two workmen (maybe both) got word out that we were running out of butane and may need someone to take us into the next town to get butane. They were quite worried that we may run out of butane and were ready to intervene! Calvin actually thinks we are OK for right now, although the only way we will really know if we are low is if the stove or hot water stop working!

This whole thing took quite awhile to sort out because a French  pilgrim staying at the albergue  thought he could help in the translation and he got involved too. His Spanish was probably about the same level as mine and he got confused about the Spanish words for full and empty which prolonged the discussion even more. In the end it all got sorted out and everyone now knows the butane truck will come (probably) next Wednesday, and we are hoping that what we have will last for a week. We're still not sure why the truck didn't come this Wednesday as  it was supposed to but c'est la vie!

It was touching to us that the workmen got word out in the village that we might need help, and we think the villagers of Villacazar de Sirga are very fine people indeed. So we will have to get a sweet treat from the village store for the two workmen to thank them for watching out for us!! It takes a village to look after these two hospitaleros!

Photos of the albergue 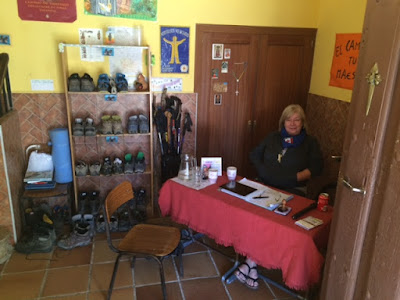 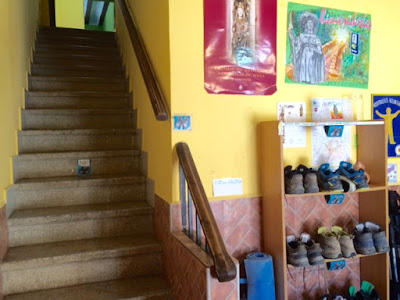 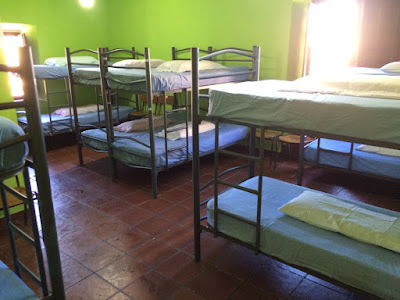 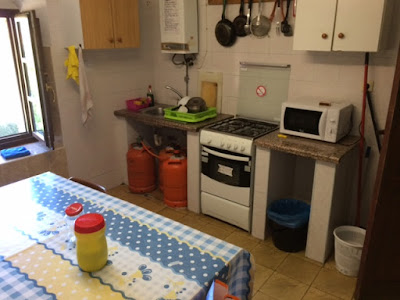 And sunset at Villalcázar de Sirga 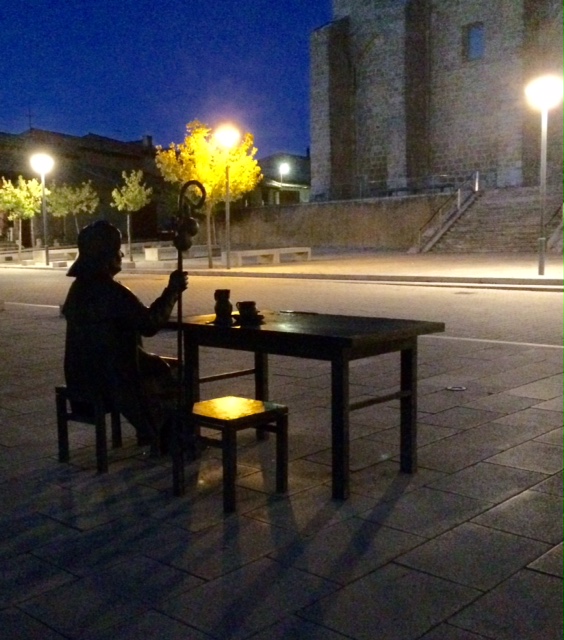 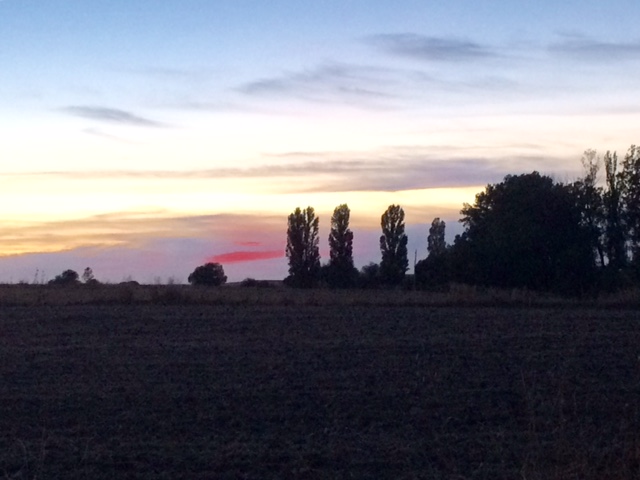